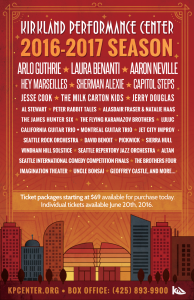 With our new 2016-17 season announced earlier this week, we asked Ryan Price, our Production Manager to write a post on how he programmed the season. After selling out more shows in our 2015-16 season than ever before, we are excited for this new season to be a huge success. Here is what he had to say about programming.

This year I began carrying the torch that is programming the Kirkland Performance Center’s Presented season. This comes with a huge responsibility; it requires a magic crystal ball, guesswork and good old fashion luck. As you may know Kirkland Performance Center is not a large venue. With only 400 seats the skill is in finding the right artist and falls into the following criteria: is actively touring, has an avid and loyal fan base, isn’t too big to play bigger venues and is something the Kirkland Community wants to see.

The 2016-17 presented season is our strongest yet and I am really excited to share it with everyone. I wanted to highlight a few shows that I believe are can’t miss.

Sierra Hull – was a child prodigy mandolin player.  She is now touring on the strength of her newly released album produced by Bela Fleck.  You may have heard her on Prairie Home Companion and she will be of particular interest to those Chris Thile Fans from last year.

Pickwick – is one of Seattle’s best bands and one of my favorite bands. Their lead singer is phenomenally talented and the band has a nice mix of garage-y guitar rock and soulful grooves of the Stax and Motown eras.  They have a long awaited album due this year and I can’t wait to see what they bring to the stage here at KPC.

Jerry Douglas – I first saw Jerry Douglas nearly 20 years ago at Wintergrass.  He was all over that festival, playing in other artists sets, doing workshops and playing dobro in the style that has earned him 14 Grammy’s.  For the show at KPC he brings his own band which is rumored to have Levon Helm’s Daughter Amy as the singer.

The Milk Carton Kids – are an acoustic duo that are masters of tight vocal harmony and have an understated virtuosity that never gets old.  Their dry and witty stage banter is entertaining and compelling.  They are often compared to The Everly Brothers and Simon and Garfunkel which is apt, but I think it worth mentioning the influence of great flat pickers like Doc Watson and Norman Blake in the guitar playing.

Sherman Alexie – we are branching out this year and are included this amazing author and poet.  Come hear him speak, he is thoughtful, funny and highly irreverent.

Laura Benanti – we have not had much musical theater in recent years, and I’m excited to say that this year we have a winner!  Do not miss this show!  It will be a very intimate performance of must Laura and a piano.

We hope you enjoy this season as much as we do! Ticket Packages are available now, and individual tickets go on sale on Monday, June 20th.