This fall, we have something for everyone to enjoy. With the weather getting cooler, spend time at a show on a fall night out in Kirkland. KPC brings exciting artists like The Milk Carton Kids and Pickwick to the eastside. Tickets to all shows are on sale now, and ticket packages starting at $69 are still available. 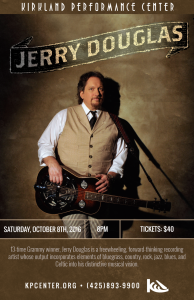 Of special note is Multiple Grammy Award winner Jerry Douglas on Saturday, October 8, 2016. Douglas, a freewheeling, forward-thinking recording artist whose music incorporates elements of Celtic, country, rock, jazz, blues, and bluegrass into his distinctive musical vision. We are excited to bring his unique talent to Kirkland. Several times throughout the season, the 50+ piece orchestra with a rotating cast of guest vocalists, Seattle Rock Orchestra (SRO) performs tributes to 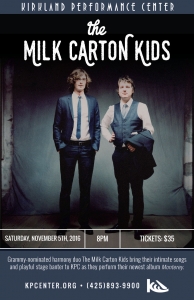 different artists/bands, including the music of David Bowie this fall. SRO will perform selections from the 20th Century music icon’s most popular songs, including “Life On Mars,” “Starman,” “Let’s Dance,” “Fame,” “Young Americans,” and many more. Nestled in between are many exciting shows including returning favorite The Brothers Four, cutting edge local indie artists Pickwick and The Milk Carton Kids, and Australian folk duo Luluc.

This season we are also starting a new series called Local Favorites, which will highlight local artists/groups and help them grow in the eastside community. Local Favorites is a new program at KPC designed to shine a spotlight on some of KPC’s frequent local collaborators. Seattle Repertory Jazz Orchestra (SRJO), Studio East, and Jet City Improv are just a few of the artists who will be presented on the KPC stage as Local Favorites. These artists and groups will also provide many educational opportunities throughout the 2016/17 Season.

Twisted Flicks: The Invisible Man – October 8, 8:00 pm  – Tickets $40
Jet City Improv’s Twisted Flicks is Seattle’s only live movie re-dubbing show that merges improv comedy with classic B movies for a hilarious cinematic experience like none other. As the film plays, the improvisers create all new dialog for the characters, sound effects, and live music – completely improvised using the suggestions provided by the audience!

The Milk Carton Kids –  November 5, 8:00 pm  – Tickets $35
Grammy-nominated indie folk harmony duo, The Milk Carton Kids, bring their intimate songs and playful stage banter to KPC as they perform their newest album Monterey.  The duo recently received their second Grammy nomination for Best American Roots Performance, for “The City of Our Lady”, and in 2014 won Duo/Group of the Year at the Americana Music Awards.