March at KPC is packed with artists of all different genres, local and international, new and returning. From UK sensations to traditional Irish music, family entertainment, and even comedy, there is something for everyone to enjoy this month. And for those planning to come to multiple shows in the coming months, ticket packages are still available throughout the season.

Here is a list of our March presented shows:

The James Hunter Six –  March 4, 8:00 pm  – Tickets $30
James Hunter’s newest album, Hold On! drips with the rawness and feeling that soul fans have come to love. He has been dubbed as “the UK’s greatest soul singer” by MOJO. 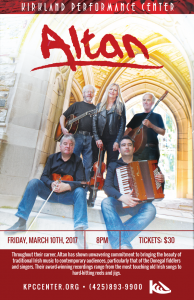 No Irish traditional band in the last dozen years has had a wider impact on audiences and music lovers throughout the world than Altan. With founding member Mairéad Ní Mhaonaigh at the helm for nearly 30 years, Altan has existed as one of the most important live acts to play traditional Irish music in Ireland and on the world stage.

Enchantment Theatre Company’s Peter Rabbit Tales –  March 11 & March 12, 11:00 am and 3:00 pm – Tickets $20 Adult, $12 Youth
This live theater production is based on three of Beatrix Potter’s “rabbit tales”: The Tale of Peter Rabbit, The Tale of Benjamin Bunny and The Tale of Mr. Tod.

Al Stewart  – March 18, 8:00 pm  – SOLD OUT
Al Stewart came to stardom as part of the folk revival of the late 60’s and 70’s, and developed his own style of combining folk-rock music with delicately woven tales of the great characters and events of history. He is best known for his #1 hit “Year of the Cat” from the platinum album of the same name.

Jet City Improv: The Lost Folio  – March 24, 8:00 pm  – Tickets $20 Adult, $12 Youth
The Lost Folio is an improvised version of Shakespeare’s works, where the audience participates throughout the performance to add plots devises, character flaws and even play roles! Come see the newest and most exciting comedy that Shakespeare never wrote.

We hope to see you this month at a show! Please view our calendar for a full list of all presented and rental performances.