The Return of the Kirkland Community Musical

We couldn’t be more excited to be partnering with Studio East for the long awaited return of the Kirkland Community Musical. Both organizations are joining forces to present Meredith Willson’s classic The Music Man. Auditions and callbacks for the show took place at KPC over the past couple weeks and had a large turnout, many of which were Kirkland residents.

Nearly 100 community members auditioned, including both adults and children, and 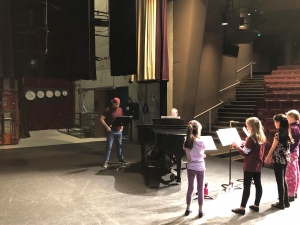 39 talented performers were cast. Now, those cast members will head into rehearsals to get ready for the March 9 opening night.

We asked a young ensemble cast member, Sofia Falcone, about her experience auditioning. Here is what she had to say; “I liked that it was fun! It was exciting to audition on the big Kirkland Performance Center stage where I’ve seen so many amazing performances before. I was really happy and proud to be able to audition on a stage that I’ve seen a lot of plays on, and I got to sing, dance, and do a monologue just like the real actors. It makes me think that I can do many more plays in the future and have a fun time doing it.” And when asked what the best part about standing on the KPC stage was, she said “it was exciting because lots of other really cool plays were there that I’ve seen and liked, so it’s amazing being able to be on that same stage as them!”

Sofia is also excited to meet new people in the cast and make friends with the other actors. Her mother, Amy Falcone told us, “I’m so thankful to have both Studio East and Kirkland Performance Center right here in our hometown. I’m thrilled that they’ve joined together for The Music Man community musical, and so proud that my daughter will get to be a part of this special project! The life lessons learned through experiences like this for a young child far exceed the performing arts skills themselves, as they instill values of confidence, hard work and team work that will benefit her for her entire life.”

Join Sofia and the rest of the cast for one of their performances on March 9, 10, 15, and 16. Tickets are available here.