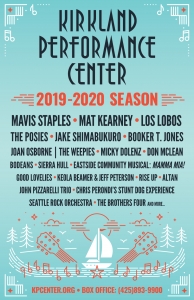 Kirkland Performance Center (KPC) announced their 2019-2020 season along with flexible and affordable ticket packages this past Tuesday. Season Ticket Packages are on sale now, and individual tickets to all presented shows will go on sale on August 20, 2019. Four Show Packages start as low as $102.

KPC’s 21st season includes big name artists and local performers starting this October. Shows include ukulele legend Jake Shimabukuro, rhythm and blues gospel singer and civil rights activist Mavis Staples, family favorite Chris Perondi’s Stunt Dog Experience, and singer/songwriters Joan Osborne and The Weepies. Of special note is local Hamilton tribute band, Rise Up, performing the hit songs from the Broadway musical Hamilton on November 14 and 15, 2019. The members of Rise Up came together to bring a musical message rooted in diversity, perseverance and dreams, and have encountered enthusiastic response at every turn. They return after two sold out performances last season at KPC.

Also in the season are many exciting shows including returning favorites The Brothers Four, live radio drama Imagination Theater, and Micky Dolenz, lead singer of The Monkees.

KPC is also continuing its Local Favorites series, which highlights local artists/groups and helps them grow in the Eastside community. Local Favorites is in its fifth year, and was designed to shine a spotlight on some of KPC’s frequent local collaborators. Seattle Repertory Jazz Orchestra (SRJO), Studio East and StoryBook Theater are just a few of the artists who will be presented on the KPC stage as Local Favorites. These artists and groups will also provide many educational opportunities throughout the 2019-20 Season.

An Evening with Los Lobos: 45th Anniversary Show  – October 2, 7:00 pm (sold-out)
http://www.kpcenter.org/event/an-evening-with-los-lobos-45th-anniversary-show/
More than three decades have passed since Los Lobos released their debut album, Just Another Band from East L.A. Since then they’ve repeatedly disproven that title. Los Lobos isn’t “just another” anything, but rather a band that has consistently evolved artistically while never losing sight of their humble roots. They will be performing half of the show as acoustic.

Jake Shimabukuro  – October 14, 7:00 pm
http://www.kpcenter.org/event/jake-shimabukuro/
Labeled as “the Jimi Hendrix of the ukulele,” Hawaiian-born Jake Shimabukuro gained fame after a releasing a viral video of his beautiful and original version of the song “While My Guitar Gently Weeps.”

Keola Beamer & Jeff Peterson – October 17, 7:00 pm
http://www.kpcenter.org/event/keola-beamer-jeff-peterson/
Keola Beamer is a Hawaiian legend who has stretched the boundaries of slack key guitar music. Jeff Peterson is one of the most versatile musicians in Hawaiian music, and has contributed to two Grammy-award winning recordings.

Kirkland Investor Sharks – November 7, 7:00 pm
http://www.kpcenter.org/event/investor-sharks-northwest/
Investor Sharks Northwest is hosted by the Greater Kirkland Chamber of Commerce and Kirkland Performance Center. The purpose of the event is to help startup businesses from the Greater Seattle and Eastside area gain exposure and compete for a chance to pitch to a panel of investors comprised of the biggest Venture Capitalists and Angel Investors in the Puget Sound region.

Evening with Booker T. Jones – November 8, 8:00 pm
http://www.kpcenter.org/event/an-evening-with-booker-t-jones/
Booker T.’s Stax Revue is a presentation of Booker’s hits with the MGs, such as “Green Onions,” “Hang ‘Em High” and “Time is Tight” and of the classics recorded on Stax Records by legendary artists such as “Try a Little Tenderness” by Otis Redding, “When Something is Wrong with my Baby” by Sam and Dave and “Gee Whiz” by Carla Thomas.

Micky Dolenz, lead singer of The Monkees –  November 9, 8:00 pm
http://www.kpcenter.org/event/micky-dolenz-lead-singer-of-the-monkees/
Micky Dolenz first established himself as a performer at age 10 after starring in his first TV series, and quickly gained fame through The Monkees, a TV show about a rock band that eventually went on to tour live as a real rock band. Dolenz is now an all-around performer extraordinaire.

The Robert Cray Band –  November 13, 7:00 pm
http://www.kpcenter.org/event/the-robert-cray-band/
Robert Cray has been bridging the lines between blues, soul and R&B for the past four decades, with five Grammy wins, a Blues Hall of Fame inductee, recipient of the Americana Lifetime achievement award, countless tours and over 20 acclaimed albums.