KPC is Now a TeenTix Partner! 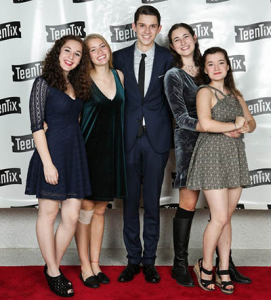 This past season, Kirkland Performance Center (KPC) became a TeenTix partner to provide teens in Kirkland and on the Eastside the opportunity to attend shows at KPC for a very discounted rate. TeenTix is a free teen membership that gets youth aged 13-19 in to movies, concerts, theater, dance performances, art museums, and more for just $5. Sound too good to be true? We know. But it’s true. All teens have to do is sign up with TeenTix to become a member and get their membership card. Then they can come to KPC the day of a show and get a $5 (cash only) ticket from the box office. To become a TeenTix member click here.

A little background on TeenTix as an organization: TeenTix was founded in 2004 by Seattle Center and in partnership with ten of the resident arts organizations on the Seattle Center campus. In 2006, TeenTix began adding partners outside of Seattle Center. Currently, over 60 arts organizations throughout the Puget Sound region participate in the TeenTix program, including Kirkland Performance Center, Seattle Symphony, Seattle Art Museum, Seattle Opera, Pacific Northwest Ballet, Seattle Repertory Theatre, Seattle International Film Festival, EMP Museum, 5th Avenue Theatre, and ACT Theatre. To date, TeenTix has facilitated the sale of over 70,000 arts tickets to teens. Learn more about TeenTix.