The KPC annual auction and gala, VIP Backstage, was quite the hit on Saturday, 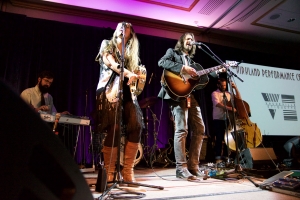 October 15th at the Hyatt Regency Bellevue. This year’s backstage theme made the night an exciting event, and was a new take on the 17 year tradition. With many local political figures including Representative Joan McBride, Representative Larry Springer, and Kirkland Mayor Amy Walen in attendance along with Kirkland socialites, local business leaders, and support from EvergreenHealth, Boeing, and Kibble & Prentice, KPC raised over $214,000 to continue to present world class performing arts on the Eastside. 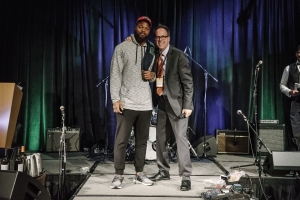 Local band Vaudeville Etiquette performed before dinner, along with receiving the 2016 Champion of the Arts award from KPC. A special appearance by Seattle Seahawks defensive end, Michael Bennett, was the surprise hit of the night, as he got guests rallied up and excited about the live auction. This year’s raise the paddle ask, raised a record breaking amount of funds for the theater, and the “backstage” atmosphere made for an exciting party. The night ended with music and dancing as KPC’s Executive Director, Jeff Lockhart performed with The Rockomatics.