Exciting Shows in the New Year

We may be half way through our season, but there are some very exciting artists coming to KPC in 2017! And with more shows selling out this season than ever, you will want to get your tickets early. Here are just a few of our upcoming performances, but make sure to check out our calendar for the full list. 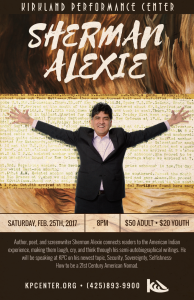 Author, poet, and screenwriter Sherman Alexie connects readers to the American Indian experience, making them laugh, cry, and think through his semi-autobiographical writings. He will be speaking at KPC on his newest topic, Security, Sovereignty, Selfishness: How to be a 21st Century American Nomad.

Arlo Guthrie – Friday, April 21st, 8:00pm
American folk singer/songwriter Arlo Guthrie comes to KPC for his 2016-17 Running Down The Road Tour. He will feature the best cuts from his catalog dating back to the late sixties and early seventies.

Shows for the whole family: 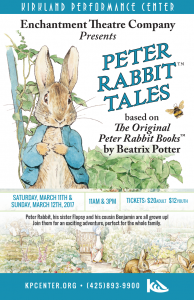 StoryBook Theater: A Little Mermaid – Weekends, April 29-May 7th, 11:00am, 1:00pm, & 3:00pm
Life underwater isn’t easy for Sirena, a little mermaid who dreams of running and dancing. In this StoryBook version of Anderson’s classic, the audience decides whether Sirena should keep her legs or high-tail it back to sea.