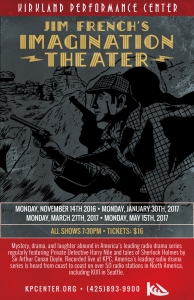 appearance of Jim French’s Imagination Theatre Company. For seventeen years KPC and Jim French Productions have enjoyed a wonderful partnership. Together this partnership has made it possible to bring to modern day audiences, a taste of the Golden Age of Radio by recording new, professional full-cast audio drama. Several times a year, KPC has presented an episode of Jim French’s awarding winning series: “The Further Adventures of Sherlock Holmes” and a new story from the longest running private detective audio show in the history of American radio: “The Adventures of Harry Nile.”

Weeks 500 and 1,000 of Imagination Theatre were both recorded on the KPC stage, and in 2015 the history making live recording session of Sir Arthur Conan Doyle’s “The Sign of Four” marked the competition of a ten year project by Jim French Productions, to fully dramatize and record all sixty of the original Sherlock Homes stories using the same actors as Holmes and Watson (John Patrick Lowrie and Lawrence Albert) and the same adaptor (M. J. Elliott). This was something that had never before been done on North American audio.

Join Jim French and KPC on Monday, January 30th for this final performance. Due to ill health and the natural aging of Jim French, the company has decided it is a bit too much for him to continue with the live shows. This final performance will be a way to celebrate Imagination Theater, and the chance for patrons to attend the very last recording. Doors open at 7:00pm and the show starts at 7:30. Tickets are still available, and can be purchased in person, over the phone through the box office at 425-893-9900, or online at www.kpcenter.org.